4 ways to green up your natural retail store 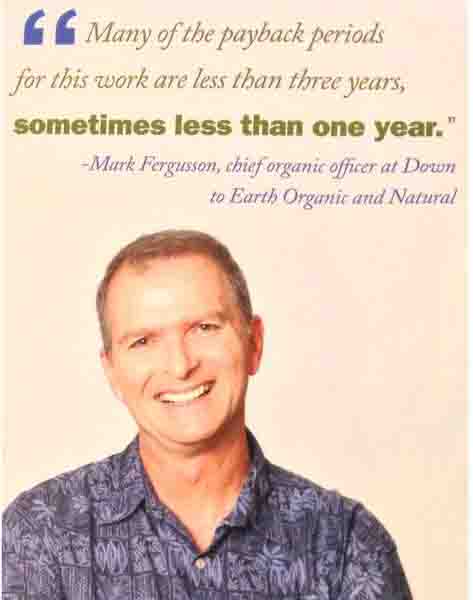 Switching lighting, air conditioning and refrigeration to newer, more energy-efficient systems are some of the most complicated, expensive sustainability efforts to undertake. However, thanks to cheaper technology, “the payback periods have become very short,” says Mark Fergusson, chief organic officer at Down to Earth Organic and Natural, an all-vegetarian five-store chain in Hawaii. “Many of the payback periods for this work are less than three years, sometimes less than one year.” (Down to Earth had extra incentive to cut back its electrical usage: Electricity on the islands often costs double what it does on the mainland.)

So far, Down to Earth has converted most of the   fluorescent bulbs in two stores to LEDs, which has cut energy use from lighting by 45 percent, saving more than 100,000 kilowatt hours of electricity per year. The company also upgraded many of its refrigerated cases to parallel rack systems with computerized climate controls, as opposed to separate condensing units for each case. The systems help moderate the cases’ energy usage, saving $2,000 a month, and provide all the hot water necessary for the stores’ operations. Down to Earth also has been converting dairy cases to closed-door displays. Yes, Fergusson concedes that dairy sales have since gone down and they have to use more air

conditioning because the refrigeration cases no longer cool the stores. “But it’s just better for the environment,” he says. It doesn’t hurt that the work has saved Down to Earth $63,000 in energy costs a year.

Fergusson has one warning: “It’s key to make sure you are using technicians who have done this sort of work before.” These state-of-the-art, computerized electrical operations are wholly different from old-fashioned lighting and HVAC systems. So check contractors’ references thoroughly, he suggests, and choose someone who will fine-tune the systems after a few months of operation. After all, it takes a lot of work to ensure these systems work as efficiently as possible.